Part of my Fulbright grant and my primary assignment to UBB is to provide a musical theatre module (an “intensive”) for the eight first-year Masters students in the acting program. I claim no expertise in musical theatre and have only limited experience, but this is one distinctly American topic that the UBB theatre admin thought I could and should share with their actors, who otherwise might not get this experience. (While musical theatre is a major component of American theatre production and academic study, it isn’t here in most of Europe.) 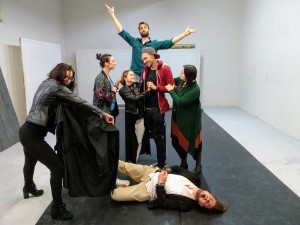 Before I even met the students, I selected and made the legal arrangements to produce The Fantasticks based primarily on logistics. There are eight roles, and I have eight actors (four men and four women). Some of the roles can be gender “flexible,” and a couple roles don’t require much dialogue or singing. Also, the musical was written to be technically simple (“low tech,” we say) and produced on a shoestring budget, and there’s little need for dancing. Perhaps most important, I have no support staff: no music director, accompanist, choreographer, nor technical director—all of whom would be considered essential back home, but here I must cover those myself. And, the show must be mounted in just three weeks. Our premiere IS May 20.

Last week, I met with the actors, had auditions, and was able to land all of them in roles that hopefully will meet their given skills (mainly their singing and spoken English) and accommodate their schedules, which are particularly problematic given their jobs and commitments to other theatres.

Side note: Of all my challenges in Romania this year, perhaps the most difficult has been getting students to attend classes and rehearsals. So many of them have jobs and legitimate conflicts, but many others simply are not in the “habit” of attending, which somehow is accommodated by the system/culture here but is absolutely bewildering to me and my Fulbright colleagues.

Our rehearsals and performance(s) are in the Fabrica de Pensule, an old paintbrush factory that has been converted into a multi-purpose arts venue. This first week, we are rehearsing 4-8 p.m. on weekdays and then 3-6 p.m. on the weekend. We were off on Monday for the May Day national holiday. On Tuesday, though missing one actor, we read and talked through the libretto. Yesterday, we plodded through the music using only my digital resources, since we don’t have a piano (or accompanist). We will begin staging this evening.

The actors have been quite warm and welcoming but also a bit anxious. This is, after all, their first musical and their first English-language production. Just imagine if you were in their shoes! Fortunately, they’re very bright and quick learners and really want to succeed with this, their end-of-the-year showcase. Certainly, I want our “product” to be a success, but this is first and foremost a learning experience.

Despite the challenges, I am so happy to be directing again. I love teaching theatre, but I also have so much creative energy and need to produce theatre. Going without for the past nine months has been tough, but, at long last, I am “back in the saddle.”